What is Tricia Helfer net worth?

Tricia Helfer is a Canadian model and actress who has a net worth of $10 million. Tricia Helfer is best known for her role as Number Six on the updated science-fiction television series “Battlestar Galactica.” She is also known for her main role as Charlotte Richards on the Netflix fantasy series “Lucifer,” and for her recurring roles on such series as “Burn Notice,” “The Firm,” and “Powers.” On the big screen, Helfer has appeared in “Memory,” “Open House,” and “Bombshell,” among other films.

Helfer won Ford Models’ Supermodel of the World contest in 1992 and signed with Elite Model Management. She modeled for 10 years, retiring in 2002 after appearing in campaigns for Chanel, Ralph Lauren, Versace, and Giorgio Armani; walking in fashion shows for Carolina Herrera, Christian Dior, Dolce & Gabbana, and others.

Tricia Helfer was born on April 11, 1974 in Donalda, Alberta, Canada to Elaine and Dennis. Growing up, she lived and worked on her family’s grain farm with her sisters Tammy, Trena, and Tara. Helfer is of Swedish, Norwegian, German, and English descent. As a teen, she went to William E. Hay Composite High School in Stettler, Alberta.

At the age of 17, Helfer was spotted by a modeling agency scout while waiting in line at a movie theater. She subsequently entered the Ford Models’ Supermodel of the World competition, which she won in 1992. Helfer went on to have a successful fashion modeling career, walking the runways of fashion shows for such top designers as Christian Dior, Givenchy, Carolina Herrera, Claude Montana, and John Galliano. She has also appeared on the covers of numerous magazines, including ELLE, Vogue, Marie Claire, Flare, and Playboy. Additionally, Helfer frequently appeared in photo shoots for Maxim. Although she retired from fashion modeling in 2002, she continued to do product endorsements, appearing in campaigns for Chanel, Versace, and Ralph Lauren, among other names. 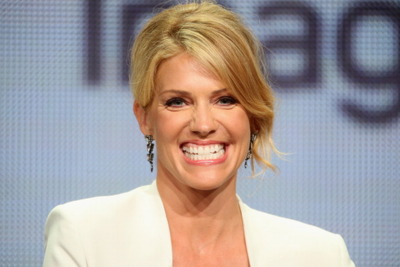 While she was still on “Battlestar Galactica,” Helfer portrayed Farrah Fawcett in the television film “Behind the Camera: The Unauthorized Story of Charlie’s Angels.” She also appeared in episodes of “The Collector” and “Supernatural,” and hosted the first cycle of the reality competition series “Canada’s Next Top Model.” Helfer had her next substantial role on a series from 2007 to 2009, when she played the recurring part of Michael Western’s nemesis on “Burn Notice.” Following this, she was in episodes of “Chuck,” “Warehouse 13,” “Two and a Half Men,” and “Human Target.” In 2010, Helfer played the main role of FBI Special Agent Alex Rice in the second season of the TNT crime series “Dark Blue.” Subsequent credits included episodes of “Lie to Me,” “The Whole Truth,” “No Ordinary Family,” and “Franklin & Bash.”

In 2012, Helfer had a recurring role on the legal thriller “The Firm,” and began voicing the Grid on the animated science-fiction series “Tron: Uprising.” In 2013, she was in an episode of “Community,” and also appeared in the television films “Finding Christmas” and “Dangerous Intuition.” The following year, Helfer played the main role of Molly Parker on the ABC crime series “Killer Women,” a remake of the Argentinian show; ultimately, it was canceled after a single season. She also appeared in episodes of “The Librarians” and “Spun Out,” and was in the miniseries “Ascension.” Among her other major roles, Helfer joined the main cast of the fantasy series “Lucifer” in 2016. After playing the main role of Charlotte Richards for seasons two and three, she appeared in a guest capacity in seasons five and six. Later, from 2019 to 2021, Helfer played the main role of Dracula in seasons four and five of another fantasy series, “Van Helsing.” Her other credits have included “Suits,” “Con Man,” and the online streaming series “Powers” and “Step Up: High Water.”

Helfer made her feature film debut in the 2003 crime thriller “White Rush,” costarring Judd Nelson. She next appeared in two 2006 films: the Christian-themed thriller “The Genius Club” and the techno-thriller “Memory.” Helfer was in another thriller, “Spiral,” in 2007, as well as the Canadian film “Walk All Over Me.” She returned to the thriller genre in 2009 with “Open House.”

In 2010, Helfer was in the drama “A Beginner’s Guide to Endings,” starring Harvey Keitel, J.K. Simmons, and Scott Caan. The next year, she starred in the thriller “Bloodwork.” Helfer’s other credits have included the comedy “Authors Anonymous” and the drama “Bombshell,” in which she portrayed broadcast journalist Alisyn Camerota.

In 2003, Helfer wed lawyer Jonathan Marshall; they later separated in 2017 before divorcing in 2019 on account of irreconcilable differences.

Active in philanthropy, Helfer co-founded the charity website Acting Outlaws with her “Battlestar Galactica” costar Katee Sackhoff. Additionally, Helfer has been involved with a variety of causes, including ones related to animal rescue and environmentalism. In 2014, she appeared in a video for PETA encouraging cat owners to keep their pets inside.