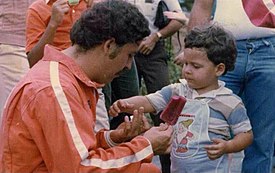 Related Articles
Sebastián with his father in 1979

Juan Pablo Escobar Henao, his mother, and his sister Manuela Escobar first fled to Mozambique, then traveled on tourist visas to Argentina, where they ultimately remained and became citizens in exile from their native Colombia. Juan Pablo chose the name “Sebastián Marroquín” from the telephone book and adopted it as his new name since he needed a new identity, stating in an interview with Skavlan that airlines refused to sell to him under the Escobar name.

Although he and his family continue to make money on the rights to Pablo Escobar’s name and likeness (such as selling clothing bearing his likeness for extra income), and have tried three times (unsuccessfully) to register Escobar’s name as a brand, Marroquín prefers not to be linked with his father because as he said in one of the interviews that after his death no one was helping them and was threatened to death so they had to change their names to escape from there, which includes mention of his previous name; he is also determined to dissociate himself from the Medellín Cartel and the illegal drug trade in Colombia.

Marroquín graduated from college with a degree in architecture. He now lives in Palermo Soho, Buenos Aires with his wife and son, and works as an architect. He has since met with some of his father’s victims. (See Sins of My Father, the 2009 documentary.)

Marroquín has returned to Colombia twice for visits: to pay his respects at his father’s grave and for the documentary’s premiere. He was not allowed to enter Hacienda Nápoles for a return visit to Escobar’s 20-square-kilometre (7.7 sq mi) estate 180 kilometres (110 mi) east of Medellin, confiscated by the Colombian government after Escobar’s death and now managed by the municipality of Puerto Triunfo as a public park, campground, and museum of Escobar’s crimes.

Sins of My Father

Sins of My Father (2009), an Argentine movie documentary five years in the making, “followed Marroquín as he apologized to the sons of victims his late father ordered assassinated during a decade of terrorizing Colombia during his time as a major drug lord.” The film promoted reconciliation and ending hatred.

Pablo Escobar: My Father Which Art in Heaven

Lyta and Baby Mama chilling together

Kanye West Biography And Net Worth 2022